Yet another syntax tree generator made with Ruby and RMagick 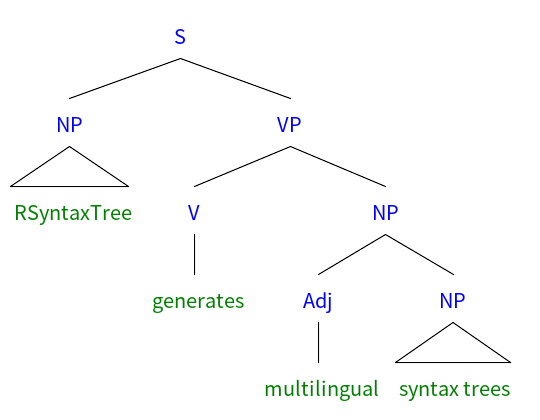 Command-line version of RSyntaxTree is available at GitHub.

Enter a sentence in the labeled bracket notation into Editor area above and click Draw PNG button. See the sample input in Editor.

Every branch or leaf of a syntax tree must belong to a node. To create a node, place a label text right next to the opening bracket. Arbitrary number of branches can follow it after an intervening white space. (You can create node lables containing white spaces using the <> symbol. Thus Modal<>Aux, for instance, will be rendered as Modal Aux.)

There are four types in which Connectors between terminal nodes and their leaves are drawn differently (auto, triangle, bar, and none). In auto mode, a triangle is drawn for a leaf containing one or more spaces (= a phrase). When a leaf contains no spaces (= a single word), a straight bar will be drawn instead (unless the leaf contains a ^ symbol at the end which makes it to be treated as a phrase).

In addition to the PNG image format, RSyntaxTree is capable of generating PDF and SVG. SVG is very convenient for those who want to modify output images on third party vector graphic software such as Adobe Illustrator, Microsoft Visio, and BOXY SVG.

Symmetrize option affects the way branching nodes are drawn. Options Font style, Font size, Connector height, and Color would be self-explanatory. Change values of these options to alter the appearance of the resulting image.

Note that text-styles must be applied to the whole text of the node. Thus:

Styles are only applicable to non-CJK characters.

Note that text-decoration must be applied to the whole text of the node. Thus:

Text decoration is applicable to both CJK and non-CJK characters.

You can add a subscript to a node by separating the main part and the subscript part with a _ symbol. For instance, NP_TOP will be rendered as NPTOP.

You can enable the Auto subscript option so that nodes with the same label will be automatically numbered. (e.g. NP1, NP2)

Combination of the above

You can apply both text style and decoration at the same time. It is further possible to add subscripts to the styled/decorated text. It should be noted that the order of application matters

Here's a well-formatted example that is somewhat complex: